When my daughter and I would visit our favorite bookstore (miss you, Borders!), as soon as we walked through the doors we would look at each other and smile as we breathed in the fantastic aroma.  We love the smell of bookstores!  There’s just something about ink on paper that’s bound with glue and mixed with a faint scent of coffee that excites us. We would scan the front tables neatly displaying all the new releases before making our way to the back of the store and the YA section.  That’s where we’d split and go our separate ways, meeting up occasionally in the center isle to confer on our findings.  It was a process, but we took it seriously.  After all, if we were going to drop twenty at the register, it had to be worthy.

Step one: the title had to be appealing.  My son has poked fun at a few of the new movie titles, insisting they lack originality.  I have to admit, the movie about a man on a ledge is appropriately titled, but where is the creativity?  The same could be said for the family that buys a house with a zoo attached to the property – We Bought A Zoo. Step two: the cover had to be eye-catching.  You know that feeling you get when you see a book, regardless of the genre, and you just have to pick it up to see what it’s about? Step three: the summary had to be intriguing, giving just enough information to peak interest and not so much that it was overwhelming.  Will you want to move on to step four or will it find its way back on the shelf?  Step four:  the contents.  Do you like the writer’s style? Does he/she have a distinct voice?

There was a time not so long ago when I had a vision.  Maybe it was more of a daydream.  Yeah, it was definitely a daydream because Borders was still open for business. Anyway, my daughter and I walked past all the hot new releases (even in a daydream, I can be realistic) and there on the shelf in the YA section was MAGESTIC DREAMS!  We took pictures with our cell phones and sent them to those we knew would be most proud and just as ecstatic.  I won’t bore you with all the details, but suffice it to say, there were enough parties, book signings, and interviews to keep me busy.

Those days are over.  I’m not saying I have given up on a dream, never.  I’ve just chosen to take the harder path.

When we purchased a Kindle for our daughter 1 ½ years ago, it was a double edged sword for me.  How could this be good for the book industry?  How could an author make any money? She was buying books for $9.99 and within a few short months, the Kindle had paid for itself.   But my daughter has an insatiable appetite for books and she was “reading us out of house and home.”  (Sounds cliché but I made that up, sort of.)  Then, something amazing happened.  She began buying books from authors she’d never heard of and at a price I couldn’t believe—sometimes as low as .99 cents. Even though the weekly trips to the bookstore are a thing of the past, the process remains the same.  Only now, the reviews take center stage.  What better way to choose an adventure than by asking your peers what they think.  It would prove to be the deciding factor in nearly 200 books on my daughters kindle.

So now, I have become one of “those” writers – an indie author.  I think I like the sound of indie– stylish, in vogue, and independent. Someone who dares to be different, who is willing to take a chance on a dream and follow the road less traveled.  For me, it has never really been about the money, though it would be nice.  It’s about finding a captive audience, one that is willing to spend twelve hours or so of their life escaping into a world I have created for them, and them loving every minute of it!  No book shelf could bring me the excitement and pure joy I felt when I first saw the pictures below.  MAGESTIC DREAMS in the hands of my readers! 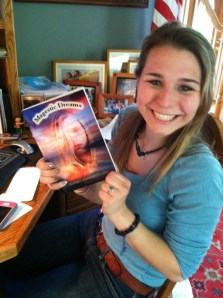 Do you have a favorite indie author? If so, let them know by following their blog or

writing a review.  And if not, I would love to be yours!